A Very Happy New Year to all who read this post. Wish you and family a prosperous year ahead.

Also, many thanks to you guys to leave your thoughts on my last post. The moving company has not found my stuff yet so we are gonna have to claim insurance and settle for peanuts in reimbursement for all my stuff, since we decided not to take special insurance before moving. Lesson learnt there !

My Baby almost came last to last week when I started having premature pain. We went to the hospital and I was there 4 hrs after which I was told to go back home and take bed rest for the rest of the term.
I have been doing just that. Well, alongwith working from home on my laptop. And ofcourse I have been doing some more knitting for my dear baby. 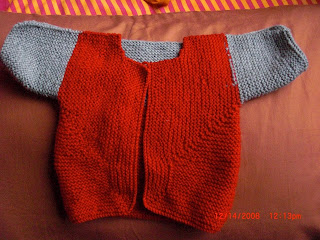 I finally made a BSJ for my own baby and I am quite proud of how neat this one has turned out. Not to mention the color combination with my favorite shade of red. The pictures above and below show the front and back when I had finished knitting it. I have since added an I-cord border all around the neck, front and bottom of the jacket. I still have to sew on buttons, I chose some transparent ones in medium size. Will try and post some more pictures with my baby coming soon now. In fact, any day ! 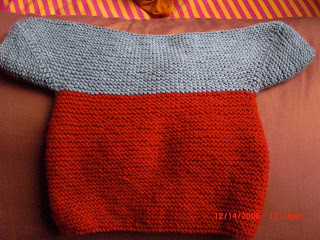 It's the same combination as the vest I showed in the last post.
That got me thinking that since I have more of this yarn, why not make a whole set for the baby. Maybe a home-coming set.
So I made this 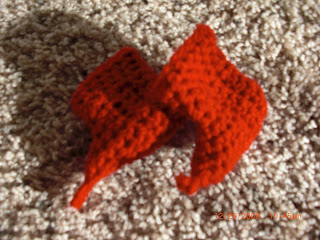 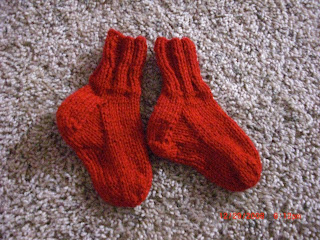 Little Baby Socks
and this 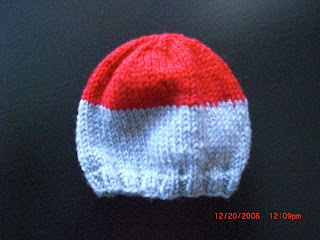 Baby Cap (my own pattern)
and this 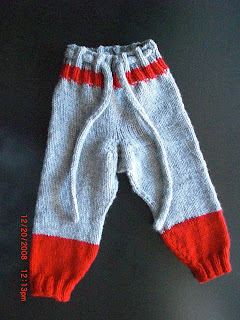 So that's the whole baby set.
I still didn't have enough, so I made this. 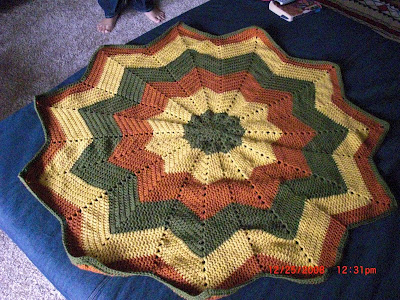 Then I wanted to crochet something out of thread, so I made this... 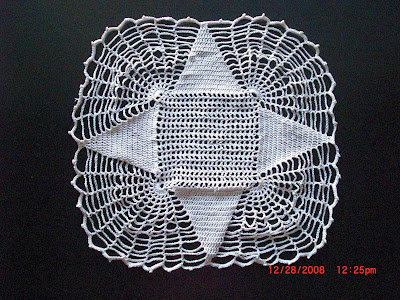 Spiderweb Doily in Colorful Doilies to Crochet from Annie's Attic

It's still unblocked, I will get around to it I guess soon.
More to come... stay tuned.
Posted by DesiLoop 5 comments:

A lot has happened this past month.
I lost my precious treasures... all my knitting notions and accessories and everything else. That's right... :"(
The movers lost a carton which had all my knitting goodies. Everything that I had got from my grandmother, everything that my mother gave me, everything that I bought myself in India and everything else that I had bought after coming to USA. All of it !!!
Although its been like 4 weeks that I have been following up with the movers, they have no news on where the carton vanished. Some of the stuff in it was brand new. I had never even used it once :( Moreover, I discovered yesterday that one of Elizabeth's DVDs was also in it...
I just cannot get over it. 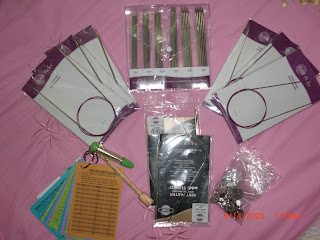 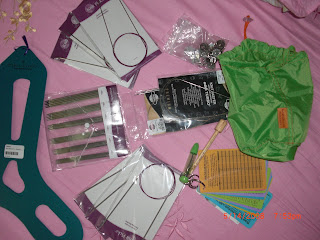 How can I ever get even near to owning everything I had :(
I guess that teaches me a lesson. Never put everything you love together... Scatter it !!!
Anyways, since I had so much to knit for my baby to be and so much more I had to buy at least enough to get me started.
So I ordered some a straight and a circular knitting needles set from knit picks together with a set of double pointed needles. 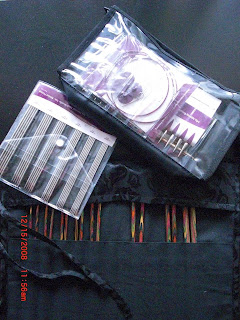 I was so disappointed that I had to work on something simple, something that did not require me using my brain... so what better than working on a "Baby Kick Sack". I found this pattern on Ravelry, looked fairly simple, so I thought, why not !
I was not thinking while making it initially... I was so preoccupied with the thoughts of my loss, I was not seeing what an awful job I was doing while changing the stripes. The lower end of the following picture shows how I was not thinking, even though I knew better. I know how to make lovely jogless joins and also doing beautiful stripes in the round, but I was not thinking. 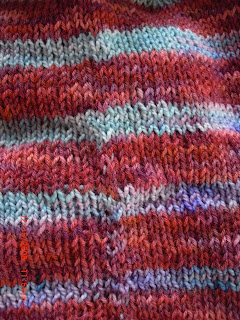 But I did regain my consciousness towards the end of it. Here is the finished object. 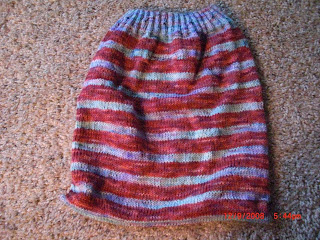 While I still cannot get over the loss, I knew better. I had to move on and concentrate on the projects I have in mind for my baby and me. So I made this. 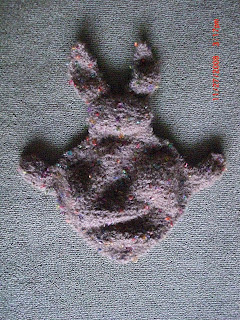 I still have to embroider the facial details, but apart from that it is done. This pattern is from LionBrand Yarn and is also on available on Ravelry.

Next I made this little cutie. 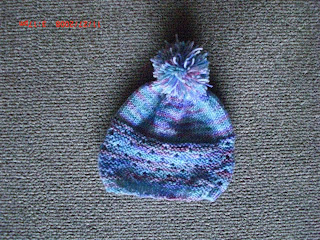 I found this pattern on Ravelry as well ! (Yes, I needed a pattern since I had no clue about size and other dimensional details for baby knits.) However as you can see where the original pattern ended below, it was definitely too small. 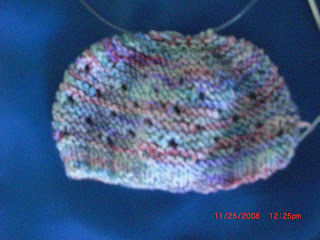 So I improvised. I frogged back to just where the crown decreases had to be started and knit in stockinette till I thought the size was fine. Turned out so great after adding that cutie pom-pom on the top, which is btw my first attempt at making one (yeah first pom pom I made).

Next I made this. This is a vest pattern from Drops with button closures on one shoulder. Here it is on Ravelry. 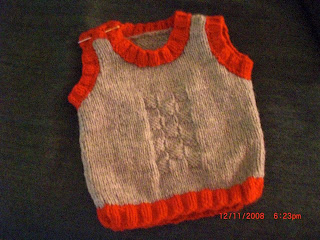 Next in line was this baby. I tried to make this on my own since now I had an idea of the size. Absolutely love it ! 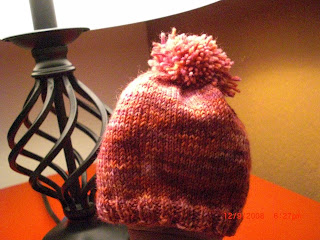 All this while, I have also been working on this for me... but I am prioritizing my baby stuff over it. Currently it is only 60 % complete. The entire top is done. More details on this in my ravelry project page. 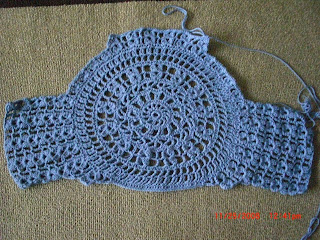 I found pictures of lovely tops made by some Russian girls on Ravelry and wanted to make one of my own. So I asked around and I started. The initial motif I worked on (see below) for the yoke, had too many big gaps which I didnt like. So I changed. 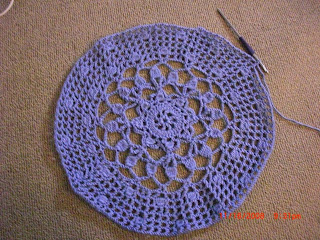 Will keep posting on the progress in future posts.
Meanwhile, I am also working on making Yeti from Berroco. Here it is on Ravelry. Its an adorable hoodie pattern and I have some homespun in my stash which I am using for it. Currently I am done with the back and front. I hope to finish the sleeves and hood today.
Posted by DesiLoop 11 comments: